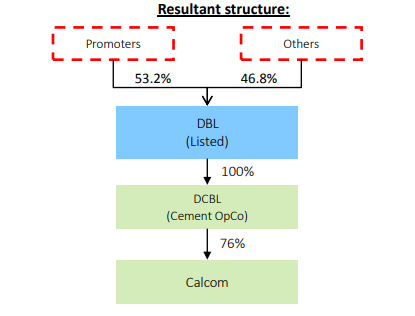 Transaction overview:
- DBL shareholders to receive 2 shares of the merged entity for every 1 share held
- DCBL to be a consolidated cement operating entity of the group
- Major milestone of corporate restructuring and simplification achieved

The respective boards considered and approved plans to reorganize the businesses with a view to
- Simplify the group structure
- Create one listed entity
- Consolidate into a single operating cement company
- Pursue focused growth towards Pan India presence
- Renewed and sharper focus on sustainable development, enhancing customer centricity,
creating pride and value creation for all stakeholders

Mr. Puneet Dalmia stated that:
“This action further strengthens our position as one of the leading cement players in India, uniquely placed to support India’s economic growth and demonstrates our commitment towards achieving simplification and consolidation.”

The Scheme is subject to stakeholder approvals, regulatory approvals including stock exchanges and other relevant authorities and completion of the previously announced scheme of arrangement involving OCL and ODCL.

Dalmia Bharat Limited is a pioneer in the cement manufacturing for over seven decades since 1939. With an expanding India footprint, the company is a category leader in all kinds of cement including super-specialty cements used for oil well, railway sleepers and air strips. Dalmia Bharat Group has strong foothold in Southern and Eastern India. The Company continues to produce best quality premium cement at lowest cost; maximizing efficiencies being the ultimate goal. The Group with current capacity of 25 million tonnes is one of the leading Cement Groups in the Indian cement industry. Visit us at https://www.dalmiabharat.com.