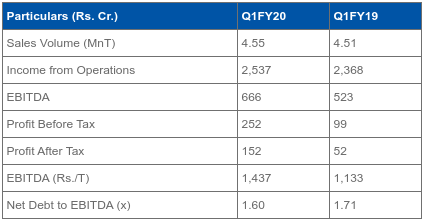 ● The company achieved an EBITDA/T of Rs. 1437/T during Q1FY20. The same is an outcome of a combination of price increase and some moderate reduction of costs.
● The volume growth was flat YOY mainly on account of the General Elections spanning during the first two months of the quarter ended June 2019.
● The Power & Fuel Cost per ton has been affected mainly due to the Kalyanpur plant operating at lower utilization levels and partly due to absence of coal linkage. The raw material cost has moderated on account of softening of the slag prices from last year.

On the back of continuity of government at the Centre and its continued focus on infrastructure development, the outlook for demand growth in India remains positive from H2FY20 onwards.

Dalmia Bharat Limited (DBL) (BSE/NSE Symbol: DALBHARAT), is a pioneer in cement manufacturing since 1939. With a growing capacity, currently pegged at 26 MTPA, DBL has the fourth largest cement manufacturing capacity in the country. Spread across nine states and 12 manufacturing units, the company is a category leader in super-specialty cements used for oil well, railway sleepers and air strips and is the country’s largest producer of slag cement. It has been globally ranked no. 1 by CDP (formerly Carbon Disclosure Project) for business readiness of lowest carbon transition. DBL also has the lowest carbon footprint in the cement world, globally. It is the first cement Company across the globe to join RE 100 and EP 100 - showing real business leadership in the clean energy transition by taking a joined-up approach. Visit us at https://www.dalmiabharat.com