New Delhi, India, December 30, 2014 – Ashoka University has signed a Memorandum of Understanding (MoU) with Singularity University (SU) in the United States. Headquartered at NASA Research Park in California, Singularity University (SU) is exploring one of its first strategic partnerships in India focused on launching a global impact competition. Globally, Singularity University aims to develop a global network of innovation ecosystems alongside a coalition of entrepreneurs, business leaders, universities, government agencies and nonprofits. Through the competition, these two insitutions hope to mobilize future resources to tackle some of India’s challenges from food to energy, water, security, health, environment, education, poverty and space by leveraging the power of exponential and innovative technologies.

Announcing the partnership, Priyank Narayan, Director of Entrepreneurship Programmes, Ashoka University said, “Ashoka University is constantly experimenting with new ways of driving innovation in India. This will be a multi-phased partnership that will encourage and enable bright Indian minds to be coached and mentored at both the Universities to not only work on global problems using technology but also work with Indian organizations and the government to create a broader societal impact in
India.”

The two universities also announced the first initiative under this MoU with the hosting of Singularity University’s Global Impact Competition (GIC) in India.

Puneet Dalmia, Managing Director, Dalmia Bharat Group and one of the Founding Members and Trustees of Ashoka University said, “We are excited to collaborate with Singularity University that is synonymous with technology and innovation. As part of the MoU, we are planning to set up an innovation centre in India that will look to positively impact some of the real challenges our country is faced with. In line with this, Dalmia Bharat has agreed to support Singularity University’s GIC themed on ‘Smart Cities’ in 2015. The contest is our effort to highlight the need for innovation and technology in helping realise India’s dream of smart cities.”

Divya Sornaraja, Singularity University’s Ambassador for India, commented that, “Global Impact Competitions are annual competitions held in partnership with sponsor organizations worldwide and we are glad to partner with Ashoka University in India. The GIC India will serve as a platform to identify outstanding entrepreneurs, leaders, scientists and engineers with the most innovative ideas to positively impact the Indian Government’s agenda of building 100 smart cities within the next 3-5 years.”

“We are excited to see the ideas generated, and the winner of this competition will be invited to attend the Graduate Studies Program (GSP) free of charge at SU,” said Rob Nail, CEO of Singularity University.

The GIC will be open to university students in the final years of undergraduate programs, as well as to graduate and post-graduate students from universities and young academics having an Indian nationality. The best, most innovative ideas will be
judged by an expert jury, which for the Indian stage of the competition consists of academics, entrepreneurs, government officials and development institutes, as well as competition winners from previous years. 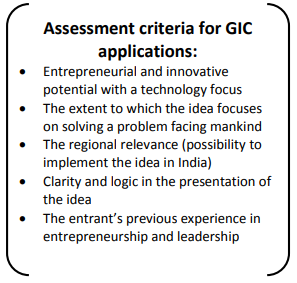 Applications for the contest will close on the 15th of February, 2015 and the winners will be announced mid-March. The winner will attend the Singularity University Graduate Studies Program starting June 2015.

Ashoka University aims at being the benchmark institution of tertiary education in India. It seeks to fulfil the unmet needs of prospective graduates by offering an Ivy League-quality undergraduate programme, based on the US liberal education system but at a fraction of the cost. Some of its academic partners include the University of Pennsylvania (ranked among the top five universities in the world), Carleton College (ranked as the top liberal arts college for pedagogy in the US), the University of Michigan (ranked among top five public universities in the USA), and Sciences Po (ranked first in Europe for research in international relations). The university recently opened its doors to over 100 undergraduates and is located on a 25-acre campus in Rajiv Gandhi Education City in the NCR near Sonepat, Haryana.